They look alike. They both play guitar. They both stay busy leading thousands of people each year in worship.

Micah has traveled to India twice with the International Mission Board. Matt likes Indian food.

Micah will be leading students and leaders in worship at the Edge conference in January. Matt was busy. 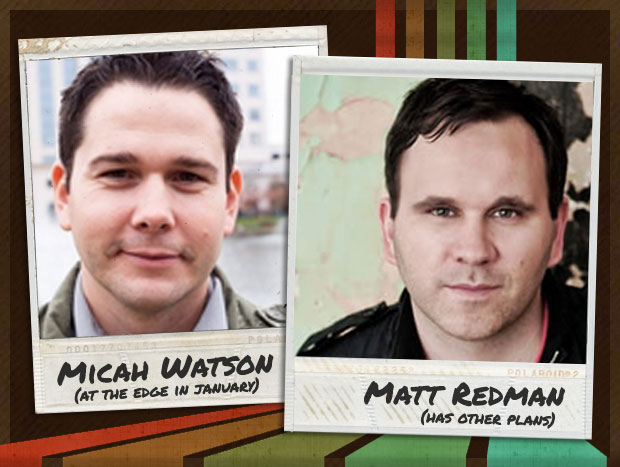 Seriously, I’ve never Matt Redman (and I sure hope he has a good sense of humor) but Micah Watson is one of my closest friends. No one makes me laugh harder. And no one knows better that worship is more than singing songs to God – it’s living life with God and for God. For Micah, that sometimes means traveling to far away places to make music and tell other about Jesus. No one is as humble.

It’s rare that musicians are both immensely talented and humble. Micah is both. Jesus said that apart from Him we can do nothing (John 15:5). Micah learned that lesson well on two life-changing trips to Mumbai.

Micah explains in an interview by CommisionStories.com…

“God went before us and is behind us working,” he said. “When you go on a trip like this, you’re just becoming a part of what God is already doing. You’re not creating a new thing. We just need to tap into what God is doing.”

Since that first trip, Watson has shared about India at every concert he’s given throughout the southern United States. His song — Your Hands, Your Heart, Your Voice — is the result of a year’s worth of talking about what God is doing in India.

He returned to the Mumbai slums to make the music video. The trip was different this time, however. Even though people stopped and stared, forming a crowd around him. Even though trash covered the streets. Even though dirty children roamed wild. Watson’s heart and voice reached out to every one as he shared the Gospel.

“As overwhelming as it is that there are so many people,” Watson said. “It’s more overwhelming that God knows each one of them.”

Watson said music is the one art form that people can’t ignore. His goal is to use music to stir people’s hearts toward what God’s doing in the world.

“If you can get songs in front of the church that are focused on missions, on what God is doing in the nations,” Watson said, “If you can get that rolling around in people’s heads, then maybe more people would give, go and pray.

“When people hear the song Your Hands, Your Heart, Your Voice, I hope they will stop and realize, ‘Hey, I have to go and be God’s heart and hands. It’s not just a lovely thought for someone else,’” Watson said. “You don’t do your Christian duty at 18 and that’s it. We’re commanded to do it.

Get a glimpse of life in India and take a listen to Your Hands, Your Heart by Micah Watson in the video below.

Oh, and one last comparison to Matt Redman. They’re both on iTunes. Load some of Micah’s music on the iPod and listen all the way to Pigeon Forge in January.

Will you commit to pray for Micah in the weeks ahead as he prepares to lead us in song at The Edge?

Haven’t registered for the Edge yet? Click the banner below to get started. See you there!